On the Dangers of Literalism A Wednesday morning, in the City of Big Days.

Red Red, the Walls are Red Two years ago I went to the annual Burlesque Hall of Fame conference in Las Vegas for my first time, and had a blast. I wasn’t paying attention last year, when the ticket sales blazed by, and ended up missing it; this year I’ll be back in the saddle for the four days of shows, and after that, if all goes as planned, I’ll be heading out westerly on a road-trip tour with a burlesque company full of friends.

When I was last there, midway through the event we went out on a Photo Safari up and down Fremont Street, and in and out of the vintage cars stationed there that weekend as if by purpose. (For those of you watching at home, NEVER get into a vintage car without the owner’s permission. Lest you be thumped. It helps to have gorgeous girls handy.)

END_OF_DOCUMENT_TOKEN_TO_BE_REPLACED

One Cyn to Rule Them All 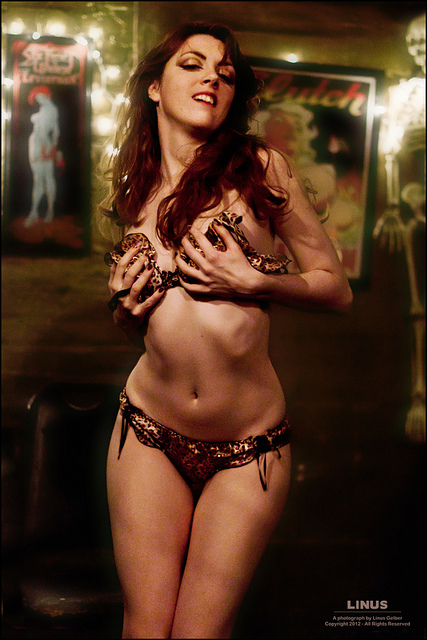 Tonight the bi-weekly Original Cyn burlesque show meets its 6th anniversary in Park Slope - a long and, um, I was going to write “distinguished” but that’s not really what I mean. Let’s settle for “dead sexy,” and mean it in the best possible way. A long and dead sexy run, then, at the Lucky 13 Saloon, a metal bar with a heart of love-you-man. (The first time I was there, the night’s drink special was some sort of froufrou pomegranate thing, which I had to order just for the pink-of-Goth discord of it.)

Founder and O.Cyn co-producer Miss Mary Cyn is generally found there, on the stage and eventually on the bar. I don’t see her as often as I’d like, but that doesn’t mean you shouldn’t. I’d be there tonight, if I weren’t doing a reading at Bar 82 in the East Village.

From an email to Organization Man:

The Neon Bible is an antsy and difficult film, so littered with scattered bits of disconnected staccato poetry that it’s no real surprise at the end when the whole thing trips over itself and swoons in a spell on the stairs. It wasn’t the planes; ‘twas clutter killed the beast.

Terence Davies’s prints are all over it – I have not read the John Kennedy Toole book, and so I can’t compare – and if the summary in the Wiki is to be trusted, Davies follows the broad strokes of the book and omits a lot of the shading, as one would expect. It sounds like he was interested in the events occurring in young David’s life, and perhaps not so much in how they played out after the first eruptions. So it’s enough to meet the venal preacher at his revival camp; we needn’t follow the trouble he causes when he settles in town. It’s enough to see a fiery fellow in a white hoodie; we don’t actually meet the Klan. It’s a kind of shorthand that works because we already know what to think about the American South in the WWII era, but it doesn’t reveal much for the heart to hold.

END_OF_DOCUMENT_TOKEN_TO_BE_REPLACED In addition to the usual regimen of seeing movies - so many movies, these last weeks, that when I skip a night it feels like I’m on vacation - and shooting burlesque shows, here at Chez Linus the days are filled with many pursuits: occasional acting projects, the c’mon-play lure of computer games, my Kindle-reading coffee-shop downtime hours, and the weekly ritual of not cleaning the apartment. (For those of you reading at home, this last is really not recommended. Two words: Augean Apartment.)

And the new: I’ve started shooting now and then in a Gowanus photo-studio share, which has been a great joy. I’m teaching myself how to shoot in the studio the same way I taught myself how to shoot at shows, which is all about trying things out and riding proudly around on my general inquisitive ignorance. (A roan, as it happens.) For my first shoot in there, since I wasn’t ready to interface with the strobes yet, I brought two clip-on work lights and a roll of duct tape. I’m not a bug, I’m a feature; too much preparation, and I never get mounted.

END_OF_DOCUMENT_TOKEN_TO_BE_REPLACED

In the modern world, some web sites will insist that you publish a numeric code to prove that you exist.

Anyone else remember how the Internet was young, just 15 years ago? It could barely toddle. These days, it’s downright arbitrary. /grump /grump It’s a busy day, which doesn’t mean it’s a coherent one. By the time I get hungry I’m thinking pizza, and my morning banana - not a euphemism - is still reclining, unimpressed, on the desk. And there it sits now, waiting (surely with pre-show jitters) to become my might-be-dinner-we’ll-see encounter in a few hours, because today the Pizza Call was a ravenous one and, as my friend Rudi says, not 2 B miss.

Another Reason to Read the Times Trotting out of the subway this morning - the escalator is down, and I take the stairs at pace - I swerve around a guy giving out free copies of the Post. He’s dressed like a futuristic urban urchin from the good old days of Metal Hurlant, his face jutting out from under a series of wraps against the cold, the sun, the passing city grit. He’s not wearing mole-man slit sunglasses, but I wish he was.

The City and the Storm 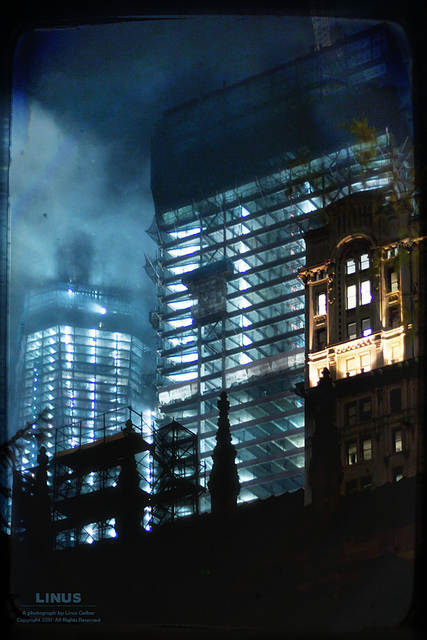 A November night, the Financial District, a wreath of storm clouds and fog. My heart runs before the wind.

A Separation (2011)
(a.k.a. Jodaeiye Nader az Simin)
Seen at: BAM Rose Cinemas
Who: Asghar Farhadi (d), Leila Hatam, Peyman Moad, Shahab Hossein, Sareh Bayat, Sarina Farhad, Ali-Asghar Shahbaz
Baggage: First viewing. It hadn’t won the Oscar™ yet when I started writing this.
Bias: It’s thinky and talky and hearty and smart, so I’m all over it from the get-go.

Through the years I’ve defended Crash against its traducers - and here I mean the Paul Haggis Oscar™-winning star-studded mish-mash movie on racism, and not the insane and discomfortable David Cronenberg picture of the same name. Crash had a fairly high ratio of foot to mouth, but it worked on its own terms, and its strong points were so very strong that I forgave it some trespasses. (Whether it should have won Best Picture over the other contenders, which included Brokeback Mountain, Good Night, and Good Luck, and Capote, is another story for a different conversation.)

A Separation does not follow the same worlds-of-worlds structure that drew the many circles of L.A. into a single-issue pot, but it reminds me of Crash in the way its story moves from hand to hand, without intent and with magnifying force. It opens with Simin (Hatam) and her husband Nader (Moad) arguing a case for divorce before a judge in Iran, staring down the camera as they present their arguments (we has met the Judge, and He is Us, as Pogo might say). Simin wants to leave the country with their daughter, Termeh (Farhadi); Nader won’t leave his elderly father, who is bedridden and afflicted with Alzheimer’s. He is willing to let Simin leave on her own; she, in turn, will not leave their daughter Termeh behind, and Termeh has chosen to stay with her father.

Thus, and deftly, writer and director Farhadi binds the first of his characters into a geometry of dependency and obligation.