It's that time of year, and I'm up in Boston for my annual pilgrimage to the 24-Hour Science Fiction Film Marathon. Last year at this time, winter had teeth.

And it’s Not Even Monday Vaughan's, on Dauphine Street in the Bywater, in New Orleans. Just like on TV.

Early this past November I went down to New Orleans for a few days. This was my first visit down there since the Dawn of Man, which I place around 1980. I don’t remember much about that prior trip - I had no money, slept on the floor in churches that put up Mardi Gras travelers by night, and carried my backpack all through the days because the bus station lockers were all full. (Apparently this Mardi Gras thing was a pretty popular party, who knew.) At the end of the visit, I hitched home, and had adventures.

This time there were airplanes involved, and I had a place to stay, and friends to visit. I went down with my friend Organization Man. As soon as we got into town we set up station at d.b.a. on Frenchman Street, as one will, and I met some people at the bar, as one will. Soon Organization was making insistent noises about heading off into the night to go somewhere else. Somewhere else? I got beers here, Man, and girls.

One taxi ride later we are squeezed in at Vaughan’s, hearing Kermit Ruffins and the Barbecue Swingers play their late set, eating Kermit’s red beans and rice from the pots in the back room. Just like on Treme.

Guess That’s Why they Call it the Blues

As the pre-show advertising segment winds down to make way for trailers, my friend Autumn takes a moment to check the ratings for Underworld: Awakening on Rotten Tomatoes. “Oh look,” she says. “The critics give it 28%, and the audience gives it 77.” (If you don’t Tomato, 100% is very good and 0% is very bad.)

END_OF_DOCUMENT_TOKEN_TO_BE_REPLACED

Winter, When we Have it Along the Brooklyn Heights Promenade, the cold trees twist and dance in the first - and so far only - snowfall of 2012. It's a welcome respite from our otherwise balmy winter.

There are lots of characters to meet in Five Time Champion, and writer-director Berndt Mader goes about the business of introductions quickly and quietly. His camera roams through the attractive Texas more-country-than-city exurbia, stopping to visit, lingering to clarify, and then pushing off for the next stop along the way. Let’s do the same here, minus camera.

Julius (Ryan Akin), a shy high school boy with a big mind, lies in a grassy field in the opening shot, kissing his teen girlfriend, Shiley (Noell Coet), as much with clinical curiosity as with passion. His mother, Danielle (Dana Wheeler-Nicholson), is a taxidermist - really? or is this the subtext speaking? - who dates the rich, nervous, and fussy high school assistant principal, Melvin (Jon Gries), filling the space left behind when Julius’s father left town, reputedly for another man.

Grandpa Alwyn (Don Pirl) is a gruff man of few words, first seen caring for a frail, elderly woman. When Julius pegs a stone through the kitchen window of the house, we realize that something here isn’t right, though a fair stretch of time passes before Julius tells us that the woman Alwyn is visiting is not his wife. This is how Mader, for whom this is a first feature, handles revelations in the movie: we see them and have time to taste and ponder before the narrative surfaces and it’s time to move on.

Five Time Champion is generally packaged as a coming-of-age movie, and that’s partly what it is. It’s really a film about the chaotic banality of dishonesty, especially sexual promiscuity, although none of the characters is just sleeping around: each is playing the field in order to till the field, looking for partners and committed relationships, or honoring the ones that have come before.

END_OF_DOCUMENT_TOKEN_TO_BE_REPLACED

Kristina Nekyia dances a dark routine inspired by Dario Argento's Suspiria, at the 2010 Burlesque Hall of Fame Weekend in Las Vegas, and wins the First Runner Up spot in competition.

The House(maid) that Dripped Blood Lisette and Mary, a couple of shiny sparkly silver friends at the Coney Island Mermaid Parade in 2008. Photographs and blog entries are not related - they're just adjacent, and simultaneous. Or something.

The film is a handsome and meticulous piece set largely inside the severely polished mansion of Mr. Hoon (Lee), a vastly rich man involved in undisclosed business. Actually, it may take place at least partly in the dreamy, tender head of Eun-yi (Jeon), a young woman hired at the start of the film as a nanny and maid for the Hoon family, but more on that later.

Mr. Hoon is the sort of affable, remote husband who comes home looking immaculately pressed after a day at the office and drapes his sleek, chiseled frame onto his leather sofa, swirls a meticulous balloon-glass of wine (red), and listens to some relaxing music (opera). Now and then he garnishes the day by playing some soulful piano (Beethoven), or taking the family out for a schvitz at the spa in their monster SUV (Chevrolet). His English is only rudimentary, but his American is loud and clear.

Eun-yi moves into the house to care for Mrs. Hoon (Seo), a delightfully bitchy whiner of a wife who might be nicer if she were not explosively pregnant with twins. Mrs. Hoon’s craven mother-in-law and her elder-statesman maid Byung-sik (Yun, majestic and full of muted heart) run the place with casual malice, leaving Eun-yi only the young daughter Nami for friendly companionship. When Mr. Hoon arrives in Eun-yi’s room, sent packing from his marital bed one bloated evening by a wife in no mood for his attentions, we can sympathize with her uncertain acquiescence to his seductive approach. He’s the master of the house, after all, an epitome of wealth and power and culture. And not for nothing: ripped.

After which, of course, everything goes to hell, and the squeaky wheel comes to a bad end.

END_OF_DOCUMENT_TOKEN_TO_BE_REPLACED 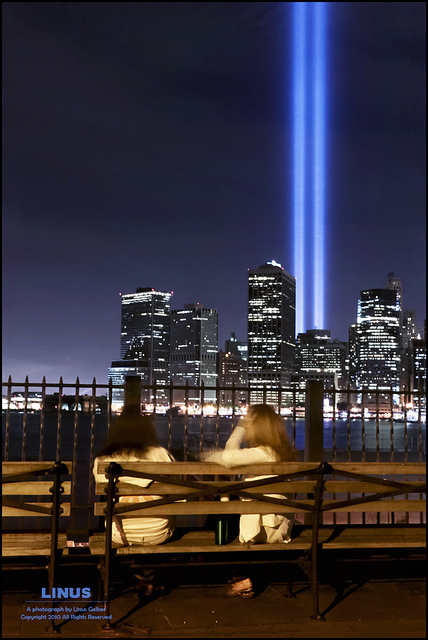 This year's Tribute in Light 9/11 memorial, taken from the Brooklyn Heights Promenade. Two women watch and talk in the foreground.

Please stand by. The trouble is not in your set. The trouble is all over the floor of my apartment, in sullen stacks, and I have to go through all of them to get stuff ready for the accountant. This happens every year and I never get any better at it. No posting til Brooklyn, as they say.

Mind you, I managed to procrastinate all the day away yesterday, but I didn’t get anything organized or productive done. That seems to be OK - de rigueur, really. But writing a coherent blog entry would be wrong. /shrugs You know, a guy reaches into his pocket to check if his pen is still there, and turns around once or twice, and reckons that he should remember to charge his cell phone tonight, and all of a sudden it’s 2010. It’s some sort of rough magic, I tell you. We’ve made it through thickets of the Noughties and out into the jungle of whatever we’re going to call these next years, a little shabbier for the wear.

It feels like it took an awfully long time for so little time to pass, but at least it was over in a flash. Plus, I can’t believe it’s already 5771, it seems like only yesterday it was 5760. <- ObJewJoke

Since we last appeared in this space, lessee. Pierre continues to single-handedly support the entire local music scene in New York City, just about, with an ardor that makes up for me not going to shows any more (after a decade in and near the Biz, I just got tired of the whole kitchen, stewpots and all).

I take a lot of pictures, and have settled in to a more or less permanent vigil at the BAMcinématek, where I for my part see so many movies that it makes up for Pierre not having been to the cinema since about 1999, when he refused to see Fight Club on the grounds that he doesn’t like “boxing movies.” And so the Cosmic Balance is maintained.

And why maintain the Cosmic Balance if you’re not going to blog about it, right? So when I can I’ll post some pictures, and talk about some movies. Let’s see if we can make this work.