The House(maid) that Dripped Blood 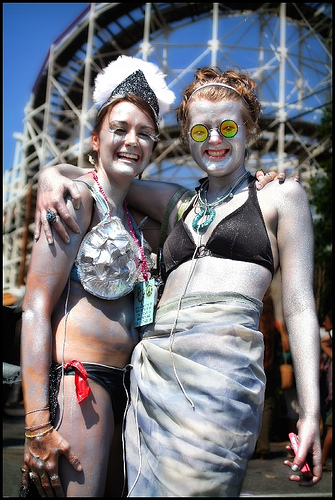 Lisette and Mary, a couple of shiny sparkly silver friends at the Coney Island Mermaid Parade in 2008. Photographs and blog entries are not related - they're just adjacent, and simultaneous. Or something.

The film is a handsome and meticulous piece set largely inside the severely polished mansion of Mr. Hoon (Lee), a vastly rich man involved in undisclosed business. Actually, it may take place at least partly in the dreamy, tender head of Eun-yi (Jeon), a young woman hired at the start of the film as a nanny and maid for the Hoon family, but more on that later.

Mr. Hoon is the sort of affable, remote husband who comes home looking immaculately pressed after a day at the office and drapes his sleek, chiseled frame onto his leather sofa, swirls a meticulous balloon-glass of wine (red), and listens to some relaxing music (opera). Now and then he garnishes the day by playing some soulful piano (Beethoven), or taking the family out for a schvitz at the spa in their monster SUV (Chevrolet). His English is only rudimentary, but his American is loud and clear.

Eun-yi moves into the house to care for Mrs. Hoon (Seo), a delightfully bitchy whiner of a wife who might be nicer if she were not explosively pregnant with twins. Mrs. Hoon’s craven mother-in-law and her elder-statesman maid Byung-sik (Yun, majestic and full of muted heart) run the place with casual malice, leaving Eun-yi only the young daughter Nami for friendly companionship. When Mr. Hoon arrives in Eun-yi’s room, sent packing from his marital bed one bloated evening by a wife in no mood for his attentions, we can sympathize with her uncertain acquiescence to his seductive approach. He’s the master of the house, after all, an epitome of wealth and power and culture. And not for nothing: ripped.

After which, of course, everything goes to hell, and the squeaky wheel comes to a bad end.

Director Im does a beautiful job letting the audience fret about what the characters haven’t quite figured out. Eun-yi and Mr. Hoon seem unaware of the murmurs of the house around them, but as they revel in their earnest whispered sex (steamy and fun to watch, but not as flamboyant as you might expect from an “erotic thriller”), we can clearly see from our side of the screen that the clock is ticking loudly. There’s a bit of deft cat-and-mousing with doors and hallways and soon enough the lovers are exposed, although they don’t know it yet. When Mrs. Hoon’s mother-in-law first tries to murder Eun-yi, in a stagy intentional accident that lands our heroine in the hospital, the hapless protagonist is the only one who doesn’t realize how much danger she is in, and things only get worse when the doctors announce that Eun-yi is pregnant.

By the middle of the picture, when the lines are drawn, no one is really in the clear: we are attracted to Eun-yi, but she isn’t blameless in what went down. Sleeping with the boss was asking for trouble, yes? And what if she is the scheming gold-digger that the family women believe she must be? We’re more or less on her side, but we’ve seen her take the promising envelope that Mr. Hoon passes to her after their first tryst, and we’ve seen her go back for more.

Absent any moral high ground, the story becomes a process of tactics and scorched earth, and a sense of dread builds up fast. While some of Im’s moves are drawn from the Hitchcock repertoire, his style owes more to Polanski, the go-to guy for slick moral abiguity. His scenes are framed with a still, austere awareness of walls and passages, his rooms are visually lush and chilly, and he creates occasional images of wonderful pristine beauty. Stern angles mimic the skewed power relationships between the maid and her masters. There’s a lot of work in each frame, but it all looks as if that’s how the camera found it. Im has the habit of showing us places where action will unfold later on subsequent visits; when his camera lovingly lingers on a patch of tiled floor at the foot of the stairs, I can’t help but wonder who’s going to end up in that spot.

The Housemaid was apparently something of a problem production. Director Im rewrote the first script so completely that the original screenwriter left the film in a huff, and there is some patchworking left in the movie. The dramatic revenging climax and the peculiar quiet coda - no spoilers here today - seem abrupt, and there’s a fiery event that arrives without warning and seems rather unlikely. This may be the remnant of herky-jerky plotting, but it may also be the hint of a quiet narrative frame.

The film begins with an unknown woman climbing out of a high window and leaping from the ledge; the city bustling around her is so busy that it takes a few moments before her body is noticed on the street. This is left as a pure bit of raw setting, with no clear connection to the movie we’re about to watch. When news about the jumper spreads through the street, though, there are a series of jump-cuts to reactions and momentary vignettes, and the camera lingers on the ways people respond to the woman’s fall.

Since Eun-yi’s final showdown also involves a big jump into the void, it made me wonder if we can think of the entire film as a detailed dream, in which she imagines the backstory of the suicide. Before she is hired by the brutal Hoons, we meet Eun-yi sharing cramped digs with a restaurant co-worker; after the anonymous suicide in the opening minutes, they go off to sleep, to be interrupted the following morning by Byung-sik, the stern servant, arriving with an offer of employment. After she leaves the Hoon house, but before the extremity of the closing events, Eun-yi takes refuge again in the small shared apartment, and again we see her heading off to sleep.

The bulk of the story, then, could be the wishful wistful restless dream of a poor young girl trying to make ends meet in the big city, picturing an upper crust lover who lives a privileged life like the one she sees in the Hollywood pictures, and inspired by the violent random death she saw on a work night.

It doesn’t matter which way you take it, really; the story is valid in both accounts. The Housemaid is a pretty and precise film notable for its lovely composition and for its crafty handling of suspense. The actors are delightful, the story reflects some classic Hitchcock tropes in interesting ways, and overall there’s a crisp vigor to it that raises it above standard fare.

I note that IMDb lists the run time for the movie as 106 minutes, BAM lists the run time as 95 minutes, and a review in the Hollywood Reporter after a screening at Cannes places the length at 120 minutes. It may be that the version I saw was traumatized for American release, or this could just be the routine confusion that comes with advance screenings of foreign films. In any case, The Housemaid has its U.S. premiere at the Mill Valley Film Festival in California on October 15, 2010, and it will be released by IFC films in 2011.

The man behind the curtain. But couldn't we get a nicer curtain?
View all posts by Linus →
This entry was posted in At the Movies. Bookmark the permalink.